ACT (American College Testing) - a national college admissions examination that consists of subject area tests in English, mathematics, reading, and science.  Most students take the ACT during their junior or senior year of high school, and colleges and universities use the ACT to make admission decisions.  This test is offered FREE to all 11th graders at CCHS each Spring.  During 2019-2020 school year, the ACT test will be offered at CCHS on March 3rd.  A fee is required if students take it again. Students can take the ACT test up to 12 times, however research shows that taking the test more then three times is not likely to help the student.

Receiving and Sending your ACT scores
ACT Score Reports are mailed up to 8 weeks after test documents are received by ACT.  ACT runs test documents in batches and there is no guarantee that all Corner Canyon students’ test documents are run in the same batch.  Score reports may not all arrive at the same time.  Students who have taken an ACT test prior to the administration on February 20th may see their scores in the ACT account they set up for their previous testing.  Students who took the ACT for the first time on February 20th will need to set up an ACT account in order to see their score report online, which they should do AFTER they receive their score report in the mail.  The administration and Counseling Center have no control over when score reports are sent, they are sent directly from ACT.
Score reports will be mailed to the address entered in the non-test information.  If the address provided was incorrect or the bubbling was inaccurate, no report will be received in the mail.
Click here to see an information and instruction page from ACT which will provide assistance in the process of creating an account and seeing your scores online.  This page also includes information on how to send your scores to colleges and universities and associated fees. 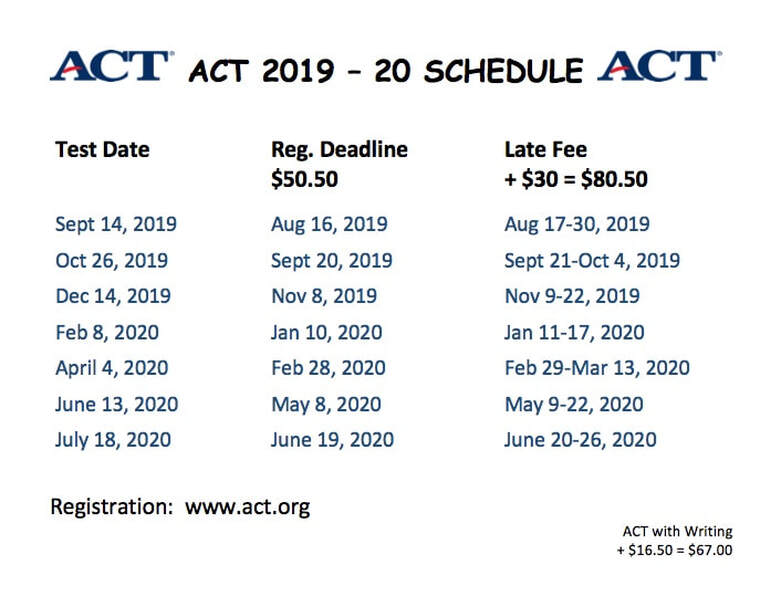 Most colleges and universities accept both the SAT and ACT, but you should check the schools on your target list to see if they have a preference.  The tests are fairly similar in the types of questions, although the SAT is slightly longer and doesn't include a science section.  Other differences between the tests include:  1. The SAT focuses more on vocabulary and general reasoning.
2. The math section of the ACT is more advanced than the SAT.

Like everything in life, if you want to do well, you must prepare.

Here are some great websites that you can use to do some ACT prep on your own: